HIF-1α, one of the most extensively studied oncogenes, is activated by a variety of microenvironmental factors. The resulting biological effects are thought to depend on its transcriptional activity. The RNAse enzyme Dicer is frequently downregulated in human cancers, which has been functionally linked to enhanced metastatic properties; however, current knowledge of the upstream mechanisms regulating Dicer is limited. In the present study, we identified Dicer as a HIF-1α–interacting protein in multiple types of cancer cell lines and different human tumors. HIF-1α downregulated Dicer expression by facilitating its ubiquitination by the E3 ligase Parkin, thereby enhancing autophagy-mediated degradation of Dicer, which further suppressed the maturation of known tumor suppressors, such as the microRNA let-7 and microRNA-200b. Consequently, expression of HIF-1α facilitated epithelial-mesenchymal transition (EMT) and metastasis in tumor-bearing mice. Thus, this study uncovered a connection between oncogenic HIF-1α and the tumor-suppressive Dicer. This function of HIF-1α is transcription independent and occurs through previously unrecognized protein interaction–mediated ubiquitination and autophagic proteolysis. 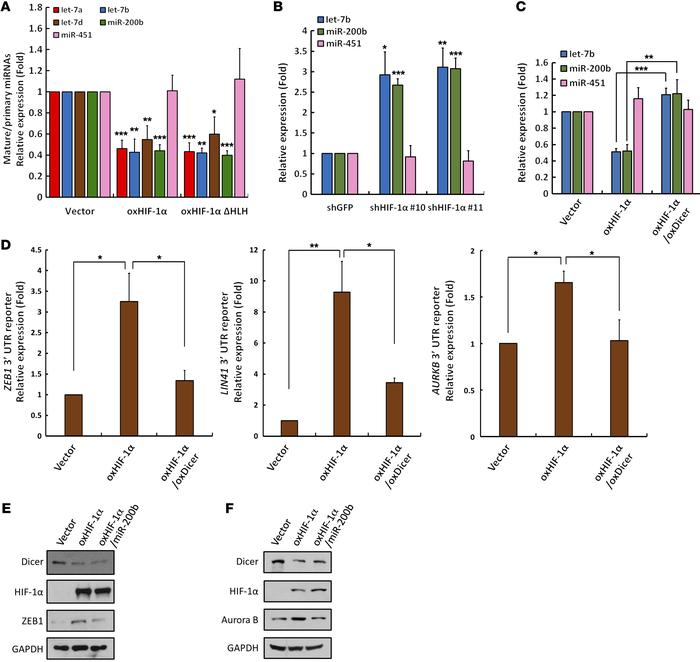 (–) Effects of HIF-1α on Dicer-dependent miRNA maturation. HCT116 cells overexpressing HIF-1α or HLH domain–truncated HIF-1α (), knockdown of HIF-1α (), or restoration of Dicer () were subjected to quantitative reverse-transcription PCR (qRT-PCR) for analyzing the expression of miRNAs, including let-7 family members (let-7a, let-7b, let-7d), miR-200b, and miR-451. () The ratios of mature to pri-miRNAs for let-7a, let-7b, let-7d, miR-200b, and miR-451 were determined using data sets shown in . (–) Effects of HIF-1α–regulated Dicer on the expression of miR-200b and let-7b–targeted genes. HCT116 cells were transfected with , , or 3′ UTR luciferase reporter. The expression of luciferase was assayed in HIF-1α–overexpressing cells with or without Dicer restoration (). miR-200b () or let-7b () was restored in HIF-1α–expressing cells. Aurora B, let-7b–targeted gene was analyzed by Western blot. The immunoblots presented were derived from replicate samples run on parallel gels (). Data are presented as mean ± SD, with at least = 3 per group. Unpaired, independent groups of 2 were analyzed by 2-tailed Student’s test. Multigroup comparisons were analyzed by 1-way ANOVA with Tukey’s post hoc test.