Magnetic resonance–guided focused ultrasound (MRgFUS) facilitates noninvasive image-guided conformal thermal therapy of cancer. Yet in many scenarios, the sensitive tissues surrounding the tumor constrain the margins of ablation; therefore, augmentation of MRgFUS with chemotherapy may be required to destroy remaining tumor. Here, we used 64Cu-PET-CT, MRI, autoradiography, and fluorescence imaging to track the kinetics of long-circulating liposomes in immunocompetent mammary carcinoma–bearing FVB/n and BALB/c mice. We observed a 5-fold and 50-fold enhancement of liposome and drug concentration, respectively, within MRgFUS thermal ablation–treated tumors along with dense accumulation within the surrounding tissue rim. Ultrasound-enhanced drug accumulation was rapid and durable and greatly increased total tumor drug exposure over time. In addition, we found that the small molecule gadoteridol accumulates around and within ablated tissue. We further demonstrated that dilated vasculature, loss of vascular integrity resulting in extravasation of blood cells, stromal inflammation, and loss of cell-cell adhesion and tissue architecture all contribute to the enhanced accumulation of the liposomes and small molecule probe. The locally enhanced liposome accumulation was preserved even after a multiweek protocol of doxorubicin-loaded liposomes and partial ablation. Finally, by supplementing ablation with concurrent liposomal drug therapy, a complete and durable response was obtained using protocols for which a sub-mm rim of tumor remained after ablation.

Mechanisms for enhanced accumulation after ablation at the boundary between viable and nonviable tissue stained with H&E in the NDL tumor model. 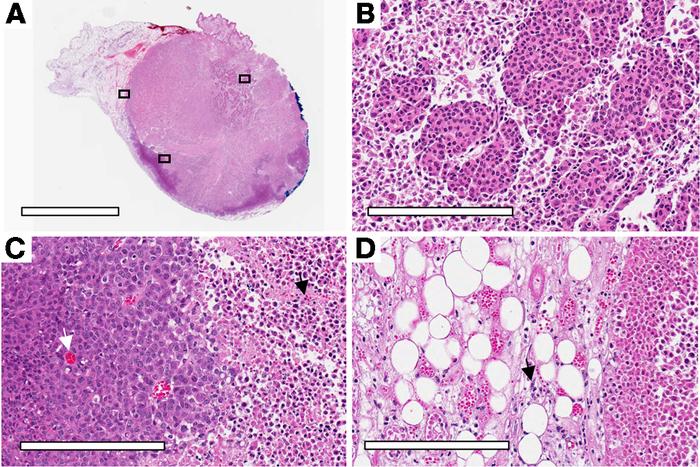