Gliomas account for approximately 80% of primary malignant tumors in the central nervous system. Despite aggressive therapy, the prognosis of patients remains extremely poor. Glioma stem cells (GSCs), considered a potential target of therapy for their crucial role in therapeutic resistance and tumor recurrence, are believed to be key factors in the disappointing outcome. Here, we took advantage of GSCs as the cell model to perform high-throughput drug screening, and the old antibiotic clofoctol was identified as the most effective compound, showing reduction of colony formation and induction of apoptosis of GSCs. Moreover, growth of tumors was obviously inhibited in vivo after clofoctol treatment especially in primary patient-derived xenografts and transgenic xenografts. The anticancer mechanisms demonstrated by analysis of related downstream genes and discovery of the targeted binding protein revealed that clofoctol exhibited the inhibition of GSCs by upregulation of Krüppel-like factor 13 (KLF13), a tumor suppressor gene, through clofoctol’s targeted binding protein, Upstream of N-ras (UNR). Collectively, these data demonstrate that induction of KLF13 expression suppressed growth of gliomas and provide a potential therapy for gliomas targeting GSCs. Importantly, our results also identify the RNA-binding protein UNR as a drug target.

KLF13 is induced by clofoctol and can inhibit growth of GSCs. 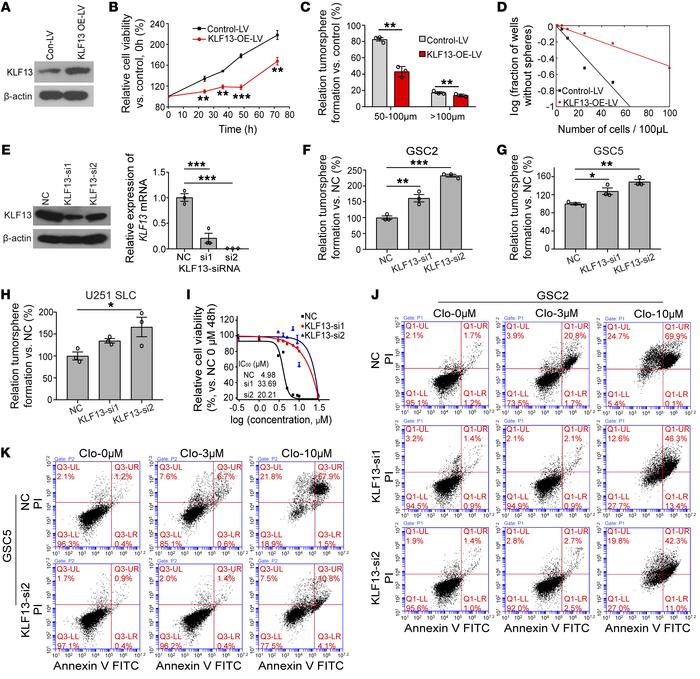 () Western blotting analysis of KLF13 overexpression by related lentivirus. () Control [LV5 (EF-1aF/GFP&Puro)] or KLF13-LV-overexpressing [LV5 (EF-1aF/GFP&Puro)-KLF13] GSC2 cells were sorted and plated at 10,000 cells per 100 μL. The relative cell viability was detected at 0, 24, 36, 48, and 72 hours by MTS. Samples were assayed in triplicate. () Control-LV or KLF13-LV-overexpressing GSC2 cells were sorted, and 5000 cells per 100 μL were plated. The number of tumorspheres was calculated 5 days later. Data are representative of 3 wells. () Limiting dilution tumorsphere assay in control-LV or KLF13-LV-overexpressing GSC2 cells. Ten wells were analyzed for each group. () Knockdown of KLF13 was successful at the RNA and protein levels. (–) Colony-forming ability was increased by KLF13 knockdown in GSC2 (), GSC5 (), and U251 SLC () cells. Samples were assayed in triplicate. () GSC2 cells transfected with KLF13-si1 and KLF13-si2 were treated with the indicated concentrations of clofoctol for 48 hours, and viability was measured by MTS. IC50 values for each condition are shown, and samples were assayed in triplicate. ( and ) Flow cytometry–based quantification of the apoptosis of GSC2 () and GSC5 () cells with or without KLF13-siRNA transfection after 6 hours of exposure to different concentrations of clofoctol (0 μM, 3 μM, 10 μM) by annexin V/PI staining. The related quantitative analysis is shown in . Data are presented as the mean ± SEM. For and , 2-tailed Student’s test was used. For –, ANOVA with Bonferroni multiple-comparisons test was used. * <0.05, ** < 0.01, *** <0.001.