Impaired intestinal epithelial barrier (IEB) function with loss of desmosomal junctional protein desmoglein 2 (DSG2) is a hallmark in the pathogenesis of inflammatory bowel disease (IBD). While previous studies have reported that glial cell line–derived neurotrophic factor (GDNF) promotes IEB function, the mechanisms are poorly understood. We hypothesized that GDNF is involved in the loss of DSG2, resulting in impaired IEB function as seen in IBD. In the inflamed intestine of patients with IBD, there was a decrease in GDNF concentrations accompanied by a loss of DSG2, changes of the intermediate filament system, and increased phosphorylation of p38 MAPK and cytokeratins. DSG2-deficient and RET-deficient Caco2 cells revealed that GDNF specifically recruits DSG2 to the cell borders, resulting in increased DSG2-mediated intercellular adhesion via the RET receptor. Challenge of Caco2 cells and enteroids with proinflammatory cytokines as well as dextran sulfate sodium–induced (DSS-induced) colitis in C57Bl/6 mice led to impaired IEB function with reduced DSG2 mediated by p38 MAPK–dependent phosphorylation of cytokeratins. GDNF blocked all inflammation-induced changes in the IEB. GDNF attenuates inflammation-induced impairment of IEB function caused by the loss of DSG2 through p38 MAPK–dependent phosphorylation of cytokeratin. The reduced GDNF in patients with IBD indicates a disease-relevant contribution to the development of IEB dysfunction.

Reduction of GDNF correlated with loss of DSG2 in patients with IBD. 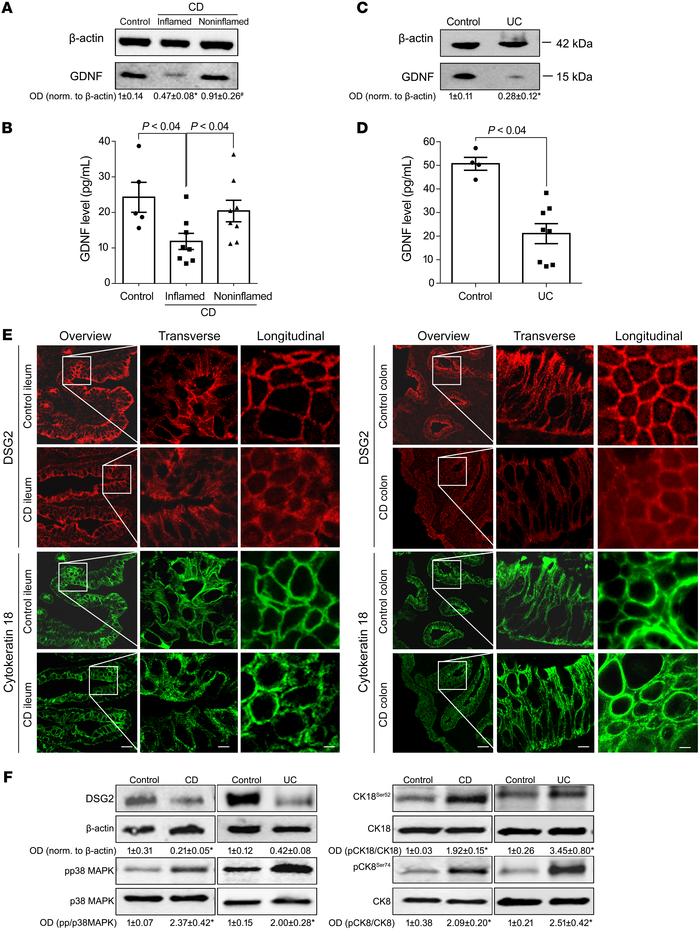 Western blot analyses ( and ) and GDNF ELISA ( and ) from resection specimens of patients with CD and UC showed significantly reduced levels of GDNF (Western blot, = 9; ELISA, = 5 control; CD or UC, = 8). Kruskal-Wallis test (ANOVA) was carried out for CD blots and ELISAs followed by a Mann-Whitney test for UC blots or Dunn’s multiple comparison test for ELISAs. () Immunostaining was performed for DSG2 or cytokeratin 18 from resection specimens from the terminal ileum of patients with CD or from the colon of patients with CU ( = 9 for each condition). Scale bars: 50 μm for the overview panels; 10 μm for the transverse/longitudinal panels. () Western blot analyses of control ( = 6), CD, and UC samples ( = 9) of DSG2, p38 MAPK, cytokeratin 18, and cytokeratin 8 were performed. Kruskal-Wallis tests (ANOVA) were carried out. OD values normalized to β-actin or to total p38 MAPK, cytokeratin 18, or cytokeratin 8 are indicated below the Western blots. * < 0.05 compared with control, # < 0.05 compared with uninflamed tissue.